skip to main | skip to sidebar

Give to REMEMBER ME RACEHORSE RESCUE everytime you search the Internet

A Sweet Reunion, 27 Year Old Yeah Me Do gets a visit from his breeder

Yeah Me Do, winning in California for owners Roy and Sue Andolfo
On February 19, 1983 a grey colt by Macarther Park was born to California racehorse breeders Roy and Sue Andolfo. These long time horse racing owners had high hopes for the colt out of Romantically, a mare trained by Joe Shell who had earned over $21,000 for the Andolfo's back in the late 70's. The colt named Yeah Me Do grew into a beautiful grey gelding that raced in California for the Andolfo's earning over $72,000 . He was claimed from his owners as a 6 year old. A year or so later the Andolfo's ran into the man who claimed their horse and asked how he was doing. They were very disappointed when the man told him that Yeah Me Do had died.
May 2009
Last summer I received a phone call from a man who had an old thoroughbred named Sonny that he had purchased from a killer sale in Cleburne, Texas 8 years earlier. He informed me that even though the horse had been wonderful riding partner for his children he could no longer afford to meet the needs of this older thinning gelding. He had attempted to seek a home for Sonny but with no luck. He tried other horse rescues but was turned down due to the geldings age, which he thought to be in his late teens. He then went on to tell me if we couldn't help him he would regrettably have to take him back to the sale where he had originally purchased him. 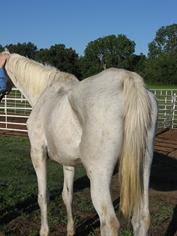 I offered to take Sonny but when he arrived I was shocked to see he was not just thin, but severely malnutrition. So much in fact that his hooves had actually started to turn loose and most of his teeth were either missing or deformed from being kicked in the mouth a few years earlier. To eat hay he would have to chew, spit it out, pick it up and chew again, and then repeat the process once more before swallowing each bite. I frantically called Dr Gene White from Diamond W Equine and he came to our farm within a few hours fighting rush hour traffic to help our new rescue.

After pulling one tooth that was protruding out from Sonny's mouth and having another one fall out while he was being floated, Dr White wormed and and vaccinated the poor thin guy. We started him on feed slowly and worked our way up with a bran, senior mash and all of the timothy hay he could eat. Within a week you could see a difference in not only his appearance but his attitude as well. I knew he was going to make it.


Horseshoer Pat Burton came and worked on Sonny's feet, the worst he had ever seen. The hooves were cracked from one side to the other not up and down like regular uncared for hooves. They would move each step the gelding took causing severe pain and discomfort. Pat used a product that formed a hardened sole, which made a stable surface for Sonny to stand on and he immediately began to move with more confidence and courage. 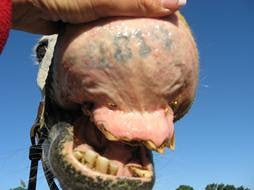 During this first week I contacted the Jockey Club with the few numbers I could read from the geldings mouth. After several tries and lots of guessing we narrowed it down to one old gelding, Yeah Me Do. I immediately posted the news on the Alex Brown's Horse Forum and to my surprise was contact by Joe Shell, the trainer of Yeah Me Do's dam. He generously donated to Yeah Me Do's care and offered to try to contact his breeders, in which he succeeded. Now retired, but still living in California, the Andolfo's couldn't believe Yeah Me Do was still alive but through photographs his identity was confirmed.

Yeah Me Do continued to gain weight. His hooves grew with the help of a few good supplements and he turned into a beautiful horse once more. We even started riding him a little, bridle-less of course like we do our racetrack ponies. 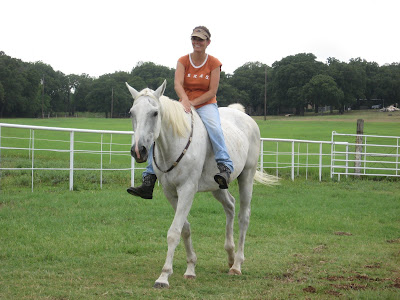 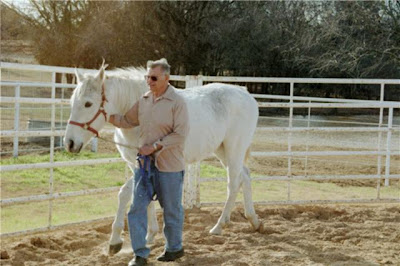 Yeah Me Do's breeders also contributed to his care and rehabilitation. But the greatest gift they have given us was a visit. In December while traveling to see family for the holidays the Andolfo's were reunited with their missing boy that they had thought was dead for so many years. The recognized their Yammi immediately even with his thick winter coat. What a wonderful day it was for them to see their horse after all these years. 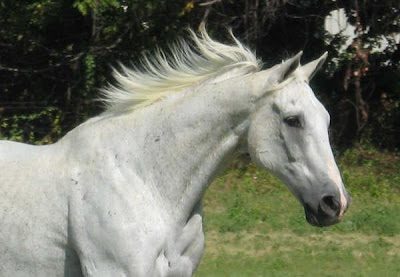 There is a special fund to donate to Yeah Me Do's continuing needs. Please click the Paypal button on the Remember Me Racehorse Rescue website at www.teamkeen.com and be sure to send an email dedicating your funds to Yeah Me Do.
We also have other horses at Remember Me that needs sponsors to support them while they rehabilitate and are retrained for new careers. Catsky with an injured tendon, Santo who was just too slow, and Classic Cozzene, a broodmare who lost her usefullness when she couldn't carry anymore foals just to name a few. Please help us continue to help retired racehorses find their forever homes by donating to Remember Me Racehorse Rescue today.
Posted by Donna Keen at 3:00 PM

That is an amazing story. So glad they got to visit their old friend.

That's amazing!! Thanks for sharing and for doing such a great job giving this old boy a comfortable retirement at last.

What an incredible story - quite emotional along the way, I really enjoyed reading it!

These horses sure do have a life don't they!

That sounds so sweet.Thanks for sharing and for doing such a great job giving this old boy a comfortable retirement at last.

Getting the love she deserves

Here at our Horse Racing Betting offices, while we try to always remember the importance of animal rescue. Animal rescue IS good business and it's everyone's best bet.

Donna and her pony at Louisiana Downs 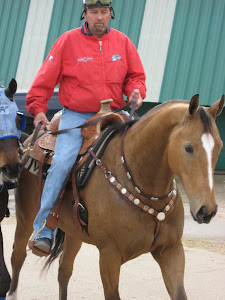 Donna Keen
Burleson, Texas, United States
Dallas and Donna Keen are currently racing at The Fair Grounds in New Orleans. We welcome new owners to the business and offer help with purchasing prospects or claiming horses that are already racing. We also have a farm in Burleson, Texas where we raise, break and train thoroughbreds. In addition to training we offer mare care and foaling facilities. In December of 2008 we formed a 501(c)3 non profit to help provide care for rescued and retired racehorses. You can learn more about us and all we do at www.dallaskeen.com 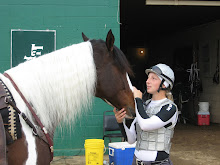 Having Heart to Heart Talk with Donna's pony Apache

Dallas and his pony at Louisiana Downs 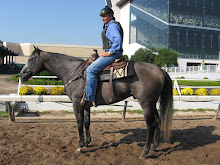 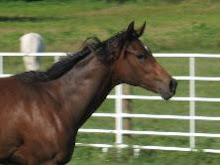 Filly by Oro Negra out of Auntie Adele 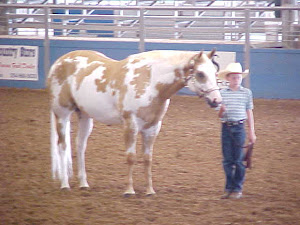 (old picture but still my favorite) 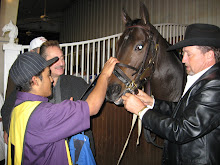 He'll say so they don't talk to the other horses! 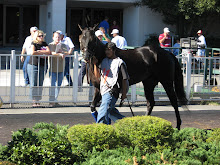 Beautiful Day at the Races